Schrodinger devised a thought experiment which is described as a paradox. 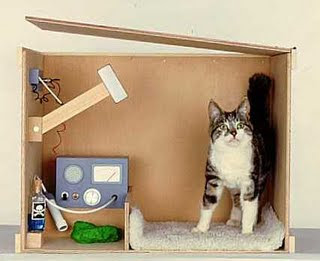 He wrote:
"One can even set up quite ridiculous cases. A cat is penned up in a steel chamber, along with the following device (which must be secured against direct interference by the cat): in a Geiger counter, there is a tiny bit of radioactive substance, so small that perhaps in the course of the hour, one of the atoms decays, but also, with equal probability, perhaps none; if it happens, the counter tube discharges, and through a relay releases a hammer that shatters a small flask of hydrocyanic acid. If one has left this entire system to itself for an hour, one would say that the cat still lives if meanwhile no atom has decayed. The psi-function of the entire system would express this by having in it the living and dead cat (pardon the expression) mixed or smeared out in equal parts. It is typical of these cases that an indeterminacy originally restricted to the atomic domain becomes transformed into macroscopic indeterminacy, which can then be resolved by direct observation. That prevents us from so naively accepting as valid a "blurred model" for representing reality. In itself, it would not embody anything unclear or contradictory. There is a difference between a shaky or out-of-focus photograph and a snapshot of clouds and fog banks."

Well, this might me bit too complicated for you to understand so I am here to break it down for you:

Imagine a box. This box is a special box,you can not see through it or hear any sound coming out from it. Basically you can't take any observation of an event happening inside of the box when it is closed. Now a dude comes and puts a cat in the box. He has an explosive device(say a grenade) which has 50% chance of blowing up and 50% chance of not blowing up in an hour and if it doesn't it deactivates itself after the hour. He puts that grenade in the box and closes the box(a horrible person?).There can be two cases:
1) The bomb has blown up and killed the cat.
2) The bomb didn't blow and is deactivated leaving the cat safe inside of the box.
Now comes the interesting part. So after a hour the box looks exactly the same no matter what. There is a 50% chance of the cat being dead and 50% chance of it being alive and you cant tell that only if you open the box. What if you don't? There is no way you can tell if its alive or dead if you don't open the box. So is it dead or is it alive? This is the paradox.

But in Schrodinger thought experiment  he put a radio-active substance in the box which triggers a poison(50-50 chance) to be released in the box which kills the cat and chances of that happening is 50-50. There have been many interpretations of this experiment:

1) Copenhagen interpretation: According to him and quantum theory it is BOTH ALIVE AND DEAD AT THE SAME TIME when you are not looking. It is like a zombie cat? Just when you open the box and look at it suddenly becomes either  dead or alive. This certainty of weather it is dead or alive is due to your act of observing it. Now think about it,this means when you are not looking your girlfriend/boyfriend is cheating on you and loyal to you the same time. :P

2) Many-worlds interpretation: This one is my favourite. According to it,after the hour the cat is alive in one world and dead in the other. Both are real and equally possible but there can not be any interaction between the worlds. Lets say: world-1(cat alive) and world-2(cat dead). So when   you open the box you can say which world you are in. You are either in world-1 or world-2. but both the worlds exist but is non-coherent.

This branching of worlds happens after every event. So in one world out there Nazis never came to power,India is a superpower,you were never been born and Justin Bieber died in a car accident last week.
Posted by Abhishek at 1:02 AM